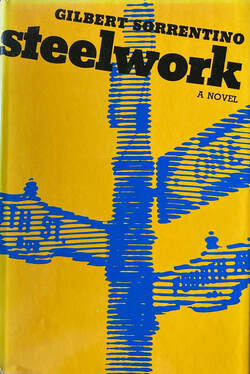 From Gilbert Sorrentino: A Descriptive Bibliography, by William McPheron: [Steelwork] was written at night in 1968-69, while GS was working regular hours at Grove Press...André Schiffrin, then [Pantheon's] director, accepted it, but only if Pantheon could also publish  Imaginative Qualities of Actual Things, which GS had almost completed by this time.  GS agreed to these terms, signed the two-book contract, and received a combined $1250 advance for both novels...the novel sold relatively poorly.  In early 1973, after Pantheon could not get a remainder price for either SW or IQAT, the publisher proposed pulping the several thousand copies of each still in their warehouse...[GS arranged] for Pantheon to sell them all in April 1973 for $500 to Peter Howard at Serendipity Books in Berkeley, CA."

Although he was under no obligation to do so, Peter Howard thereafter paid Sorrentino a 10% royalty on net sales.